On Tuesday afternoon, on the Right Bank of the Wisła River, Lech Poznań and Arka Gdynia lock horns in battle, as the season’s Puchar Polski reaches its climax. For fans outside of Poland, the game can be streamed in Live HD at OZ.com/PucharPolski. Just sign-up on the website to watch the showpiece at the impressive Stadion Narodowy. Ryan Hubbard gives a brief preview of the two teams hoping to lift the trophy.

For Lech Poznań, it has been less than a year since their last piece of silverware – July’s Superpuchar victory over Legia Warsaw, just a kilometre away on the opposite side of the river at the Stadion Wojska Polskiego. However in recent seasons the Puchar is the trophy which has evaded them having lost to the same opposition in the last two finals, and once more in 2011. For their last success in the competition you have to look back to 2009, when Sławomir Peszko’s sole strike was enough to put Ruch Chorzów to the sword.

There is an argument that the current Lech side is one of the best since that 2009 group consisting of the likes of Peszko, Robert Lewandowski and Semir Stilić. It’s one backed-up by the fact that coach Nenad Bjelica’s team are still in the hunt for a rare Polish treble. That Superpuchar win represented the first leg, and Tuesday’s final the second. The Kolejorz also sit just a couple of points behind Ekstraklasa leaders Jagiellonia Białystok, with six games of the season remaining. The June 4th meeting between the two – the final game of the season – could be the one which writes them into the history books.

But for now the cup is the priority, and the Poznaniaks have thrice had to overcome top-flight opposition on their way to the final. After defeating second-tier Podbeskidzie Bielsko-Biała in the last 32, Ruch Chorzów and Wisła Kraków were both brushed aside with relative ease. Despite being drawn against a resilient Pogoń Szczecin in the semi-final, they too were dispatched comfortably: a 3-0 win in Poznań allowed them to take their foot off the gas in the second leg, where a 1-0 win was plenty enough to see them through to their third straight final.

Unlike their opponents on Tuesday, a whole generation of Arka Gdynia fans have grown up without their side seeing success in major competitions. Their last – and only – trophy came a whole 38 years ago, where club legend Janusz Kupcewicz helped them to a 2-1 cup victory over Wisła Kraków. Since then, a period of yo-yoing between the top two tiers has become the norm, and the biggest celebrations have been for the numerous promotions back to the top flight.

The Arkowcy’s preparations for their second-ever final have been besieged by problems, notably with a change of manager. Following a string of poor league results which saw the club swap a mid-table position for a relegation fight, Przemysław Niciński was “sent to Radom”, and former Podbeskidzie, Korona Kielce and Górnik Zabrze Boss Leszek Ojrzyński was appointed as his replacement.

While Ojrzyński will be the man to lead the team out at the Narodowy, it was Niciński who got them there. Arka started a round earlier than Lech and have still yet to face top-flight opposition in the competition. Starting with fifth-tier Rominta Gołdap, they steadily progressed through the bracket against lower-league opposition: Olimpia Zambrów, KSZO Ostrowiec Świętokrzyski and Bytovia Bytów were beaten to reach the semi-finals. There, like Lech they raced into a 3-0 lead against Wigry Suwałki. But unlike Lech they nearly lost out in the second leg, falling to a 4-2 defeat, and just scraping through 5-4 on aggregate. For his efforts, Ojrzyński has promised to hand Niciński the medal received after the final, regardless of the colour.

Although now edging to the end of his career, 35-year-old striker Marcin Robak will likely be the Kolejorz’s danger man in Warsaw. Since scoring the second-leg winner in Szczecin, Robak has netted another four goals, taking his tally for the season to 20. Powerful and with great finishing ability, despite his advancing years he will still strike fear into the hearts of the Arka defence.

Dawid Kownacki has also proved a lethal threat in front of goal this season, with the Polish U21 international netting 11 times this season – even if he has suffered a drought in recent weeks. Midfield playmaker Darko Jevtić will too cause plenty of problems for the Arkowcy.

On the other side of the field, Arka’s biggest goalscoring threat seems to be in the shape of 30-year-okd striker Rafał Siemaszko. The former Gryf Wejherowo front Man has better seven times in his last 640 minutes of football, averaging a goal every 91 minutes. Midfielder Mateusz Szwoch is also close to the same form, netting five times in ten games. However all of his goals this season have come from the penalty spot. Dominik Hofbauer too has looked impressive at times.

Tuesday’s game will be the third meeting this season between Lech and Arka, with the Kolejorz winning 4-1 in Gdynia in March, and the sides sharing a goalless draw in Poznań back on September. Ultimately though, the contrast in the two sides’ league form paints the biggest picture, beyond even the eleven league places separating them.

With 53 goals scored this campaign, Lech sit only behind Jagiellonia and Legia in terms of number of goals scored. Aria meanwhile have hit the net just 38 times in 31 games, with only Bruk-Bet Termalica and Piast Gliwice netting fewer. The contrast is even starker in goals conceded: Lech’s 24 being by-far-and-away the lowest total in the league, and Arka’s 51 being not only over 100% worse, but the third-worst in the league.

While undoubtedly the final berth has provided Arka’s best season in recent memory, it’s hard to believe they’ll claim the second title of their history. A successful season now will consist of surviving relegation, of which they sit just one point above.

Lech meanwhile are favourites, and deservedly so. It would have to take a remarkable set of events for them to return to Ulica Bułgarska empty handed.

Remember, the game is available outside of Poland, like in HD at OZ.com/PucharPolski 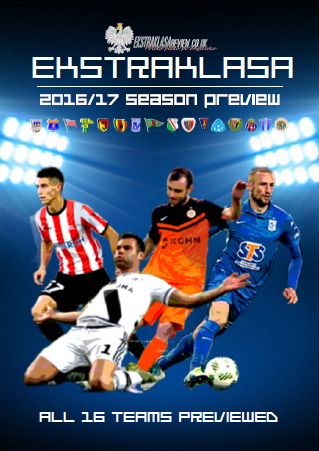