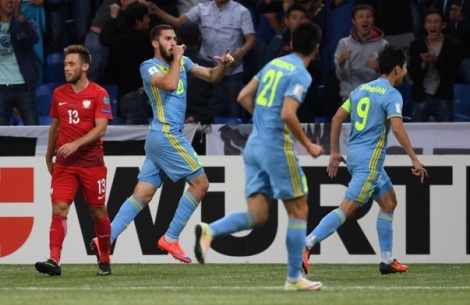 Adam Nawałka’s Poland side got off to a disappointing start in Kazakhstan on Sunday evening, surrendering a two-goal lead to draw two-apiece at the Astana Arena.

Panic, frustration, ill-discipline; none of these traits were expected of the Poland team who cruised into the half-time break with a two-goal lead over their Kazakh hosts. But within fifteen minutes of the restart all three had begun to set in, as two goals from Sergey Khizhnichenko earned The Hawks a point which could already prove pivotal in the race for Russia.

Astana was seen by many as one of Poland’s best hopes for three points on the road: a nation ranked eighty places below them in the world rankings, and who hadn’t scored more than once in a game for almost two years.

It had also been the same amount of time since Adam Nawałka last selected a Poland team without a representative from the Ekstraklasa, which he was forced into as centre-back Michał Pazdan pulled-out during the warm up. The game that night against Scotland ended in a 2-2 draw – maybe the stars were already aligned for this one…

There were four changes to the Biało-Czerwoni eleven which came within a whisker of a Euro 2016 semi-final berth: two in defence, and two more in midfield. Cagliari centre-back Bartosz Salamon was the late replacement for Pazdan, while two changes on the left side saw Lyon’s Maciej Rybus and Leicester’s Bartosz Kapustka in place of Artur Jędrzejczyk and the injured Kamil Grosicki. Possibly the biggest surprise though came in the middle of the park, with Napoli new-boy Piotr Zieliński preferred for the spot relinquished by Krzysztof Mączyński, despite his torrid performance in the position during the Euros.

Poland started the brighter, and with only eight minutes on the clock they had nudged themselves into an already-deserved lead.

It was almost as if the clocks had been turned backwards, as the former Borussia Dortmund trio of Łukasz Piszczek, Jakub Błaszczykowski and Robert Lewandowski linked with some neat passing just outside of the Kazakh box. Wolfsburg’s Błaszczykowski was the one who advanced with attacking intent, and his low cross was met deep at the back post by teenager Kapustka, who despite his lack of game time at his new club was ready to tuck home the inch-perfect ball.

Poland had to wait until the 35th minute to double their advantage, and it came via the penalty spot after captain Robert Lewandowski was bundled to the ground after a wayward challenge from Yeldos Akhmetov. After a slight delay, Lewandowski himself stepped-up to send goalkeeper Stas Pokatilov the wrong way. Poland seemed in complete control.

Yet the second should have come much earlier, and should have been added to even before the break. The goalscoring form that deserted Arkadiusz Milik during Euro 2016 returned once more, as the Napoli striker squandered two chances to extend the Polish lead. The first was the worst: hitting the crossbar with an open-goal calling – even if the ball did bounce just before connecting with Milik’s weaker right foot. The second may have been from a tight angle and preceded by a perfectly-timed run, but tell that to the three players waiting in the middle on the box for the cross.

Guarding against complacency would most-likely have been mentioned in Nawałka’s half-time team talk, yet before the hour mark thoughts of retaining the lead had gone out of the window. Two strikes in five minutes from Khizhnichenko sent the home crowd into raptures, and left the Poles shell-shocked.

The first came from the Kazakh left-side, with Dmitri Shomko’s searching cross finding Khizhniczenko in front of goal. He controlled neatly with his chest – made much easier by the fact that last defender Maciej Rybus mistimed his jump – before tapping underneath the advancing Fabiański.

Rybus’ defending was again called into question for the second, as he allowed Maksat Baizhanov to get on the wrong side, before his low cross was turned in by the former Korona Kielce striker – doubling his tally for the night, and therefore surpassing his goal tally in his 26 Ekstraklasa outings.

From thereon, tempers on both sides began to flare, with several yellow cards being dished-out for late and over-exuberant tacking. Poland’s panic was evident as they struggled to break through the Kazakh defence, being limited to shots from distance – many of which sailed harmlessly away from goal.

Tiredness also began to set in, with Nawałka inexplicably waiting until the 84th minute to make his first – and only – substitution of the game. Maybe there lay a lack of faith from the coaching staff in the bench, or maybe they were devoid of ideas of how to break down the now-stubborn back line.

Ultimately, as the referee blew for full-time, the chance of starting the campaign with a win went begging; and with just a month to go until the Warsaw double-header against Denmark and Armenia, Nawałka will need to find a way to lift his charges quickly. With only one automatic qualifying spot to fight for, they already find themselves needing to battle back from behind.