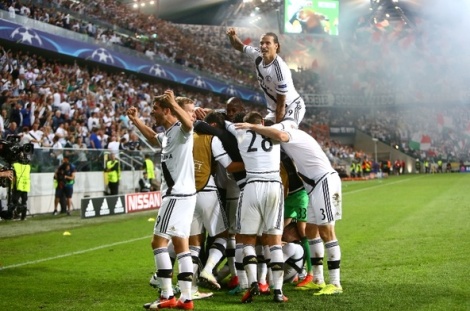 When the performances are assessed, and the verdicts handed out, it likely won’t make pretty reading. Not a single Legia player stood out as offering an inspired performance in their second leg against Dundalk. But when the history books look back, they won’t comment on an untidiness in possession or a lack of clinical instinct in front of goal. They will merely state that Legia Warsaw qualified for the group stages of the Champions League for the 2016/17 season.

After 21 years of absence, competing amongst Europe’s elite will be the only thing on the minds of Legia’s fans for now. But that’s in the distant future. In the present, and over the next few weeks, coach Besnik Hasi will be needing to make drastic gains and improvements with his squad in order to compete with the continent’s best.

Michał Kucharczyk’s injury time strike made the 3-1 aggregate scoreline look much-more one-sided than the Lilywhites deserved. In fact, only a few minutes earlier, Dundalk had squandered a couple of semi-decent opportunities which could have taken the tie to an extra thirty minutes.

While Hasi’s selection was largely as expected, it did prove a surprise in the fact that it was the first time during his fourteen-game reign he has not fielded a unique eleven. The eleven players to start the game were the same as those which won the first leg in Dublin, with only goalkeeper Arkadiusz Malarz having started the 3-1 home defeat to Arka Gdynia three days earlier.

Despite their complacency both with and without the ball, Legia did have many of the game’s early chances: the best coming after just twelve minutes when Kucharczyk tried to play-in Nemanja Nikolić. Unfortunately for the Wojskowi, Kucharczyk’s pass was misplaced, and Dundalk midfielder Robbie Benson was able to intercept.

Within just seven minutes Legia were made to pay – and by a goal of Champions League quality. Marauding full-back Sean Gannon delivered a cross in the direction of David McMillan, whose header fell into space on the edge of the Legia box. In the blink of an eye, the onrushing Benson connected perfectly with the volley, which sailed into the net leaving Malarz rooted to the ground.

While Legia responded in a positive manner, many performances were left wanting. Besides an inch-perfect effort from Adam Hlousek which was expertly saved by Rogers in the Dundalk goal, the few chances they did carve failed to trouble their Irish visitors. Both Kucharczyk and Thibault Moulin lashed tame efforts at the keeper, while on the right wing Steeven Langil struggled to provide any deliveries to test the back line.

Both sides started the second period cagily, struggling to retain possession and failing to test the opposition’s goal with any noteworthy. It took almost twenty minutes to see anything resembling a shot at goal, and that was from a combination similar to the opening goal, with McMillan’s header once again finding the advanced Benson. This time though the winter signing from UCD Dublin tried to top his previous strike with a spectacular overhead kick – one which sailed comfortably over Malarz’s goal.

Knowing that another conceded goal could see their Champions League dreams go up in smoke, there were a number of frustrations with the Legia performance among the crowd. This soon manifested itself in the players too, as Czech full-back Hlousek received two avoidable yellow cards within ten minutes to give the visitors an onus to attack. But finally, down to ten, the deficit encouraged the Polish champions to step-up their game; and from then-on there only looked to be one outcome.

Despite a squandered chance from Patrick McEleney and the defensive tactics of Hasi, Legia largely dominated the final 15 minutes. A deep Moulin cross just evaded the outstretched leg of Kucharczyk in the 82nd minute, while 2 minutes later Kuchy was marginally flagged offside when through on goal.

Yet just as it looked as though they were going to have to settle for the final whistle to decide their fate, a stoppage time ball forward from Vadis Odjidja Ofoe found the advancing Kucharczyk. Although it seemed the defender had forced him too wide, the 25-year-old confirmed his club’s place in Thursday’s draw with a powerful effort which left Rogers with no chance.