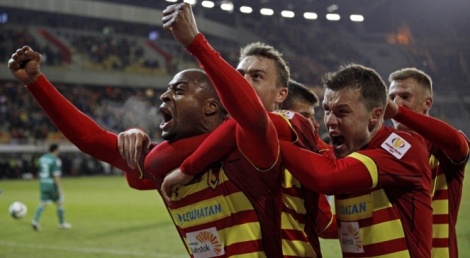 Next up in EKSTRAKLASAreview’s season review, we have Kuba Seweryn talking Jagiellonia Białystok.

Finishing in the top half of the league table and reaching the Polish Cup final – these were the objectives for Jagiellonia Bialystok in the 2013/14 season. The one given responsibility for achieving these goals was Piotr Stokowiec. Then as boss of Polonia Warszawa, last season he was able to lead the cash-strapped capital club to fifth place in the Ekstraklasa. Due to issues well beyond his control, Polonia were demoted to the IV Liga. However Stokowiec landed in Bialystok, where he was expected to repeat his results working in much better conditions than he faced at Konwiktorska.

The first half of the season was very promising. Although the team was a bit irregular, Jagiellonia started with two away wins and picked-up some great results at home, playing in front of the half-built Stadion Miejski. The Yellow-and-Reds beat Ruch Chorzów 6-0 and Wisla Krakow 5-2 – the best offensive performances in Jaga’s Ekstraklasa history. They also were able to defeat Śląsk Wrocław three times in a row (twice in the league and once in the cup) before finishing 2013 in the top half. Everything was going well and the team were praised for their offensive style of play – led mostly by Spaniard Dani Quintana, who collected 15 goals and 8 assists during the campaign.

But after the winter break something changed. With mistaken transfers, unlucky results and a rapidly worsening team spirit; Jagiellonia’s performances were getting worse every match. After the 6-1 loss against Lech Poznan in April – a loss that strongly reduced the chances to achieve this season’s goals – the board lost their patience, and the very next day Stokowiec was made jobless. In his place the Jaga board returned to Michał Probierz, who in the past achieved the biggest successes in the club’s history. The Polish Cup and the Super Cup in 2010 – the only trophies the club has ever won. The hope is that a return to that level is ahead.

But even Probierz couldn’t quickly help his new team to win their most important games of the season. The results of the other teams in the regular season’s last matchday were very fortunate for Jagiellonia, in that they only needed a win against Piast Gliwice. However the Yellow-and-Reds didn’t manage that. A 1-1 draw didn’t show the full picture: Bekim Balaj’s stoppage time header rebounding off of the post could have been very different. But those lacking centimetres held Jaga in the bottom half of the table, and condemned them to a battle against relegation rather than a European push.

After losing 0-2 in the first leg, Jaga were also unlucky to be eliminated from the Puchar at the semi-final stage against eventual winners Zawisza. 1-0 up in the second game, they had two penalty appeals unfairly waved away by referee Szymon Marciniak. Probierz was eliminated from the tournament for the second time in two rounds; having lost his job at Lechia Gdańsk following their quarter-final exit to… Jagiellonia.

There were no problems in Jagiellonia ensuring their Ekstraklasa status; finishing in 11th place – not a disaster in Bialystok, but surely a huge disappointment. But it’s not surprising that Probierz and chairman Cezary Kulesza are planning another revolution in the team. The last one brought those trophies in 2010. I’m sure the fans in Białystok wouldn’t mind a repeat of that.